The Allegory of the Cave

In The Republic, Plato tells a story that, if given enough weight, will shake you to your core. In his Allegory of the Cave, Plato paints a world where humans are shackled by handcuffs in a cave, as a fire blazes behind them. They’re forced to stare at a wall. Facing the same direction. No turning around.

Behind the shackled, freed people walk by carrying objects they have made – casting shadows on the wall. The shackled only see the shadows, not the objects themselves.

The shackled assume they are looking at real objects. How could they assume anything except that the shadows are all there is? It’s all they’ve ever known.

Suddenly, one of the shackled humans is set free. Unshackled, he walks towards the fire. The light is blinding, but after some time, his eyes adjust. He is shown the actual objects that cast the shadows on the wall. 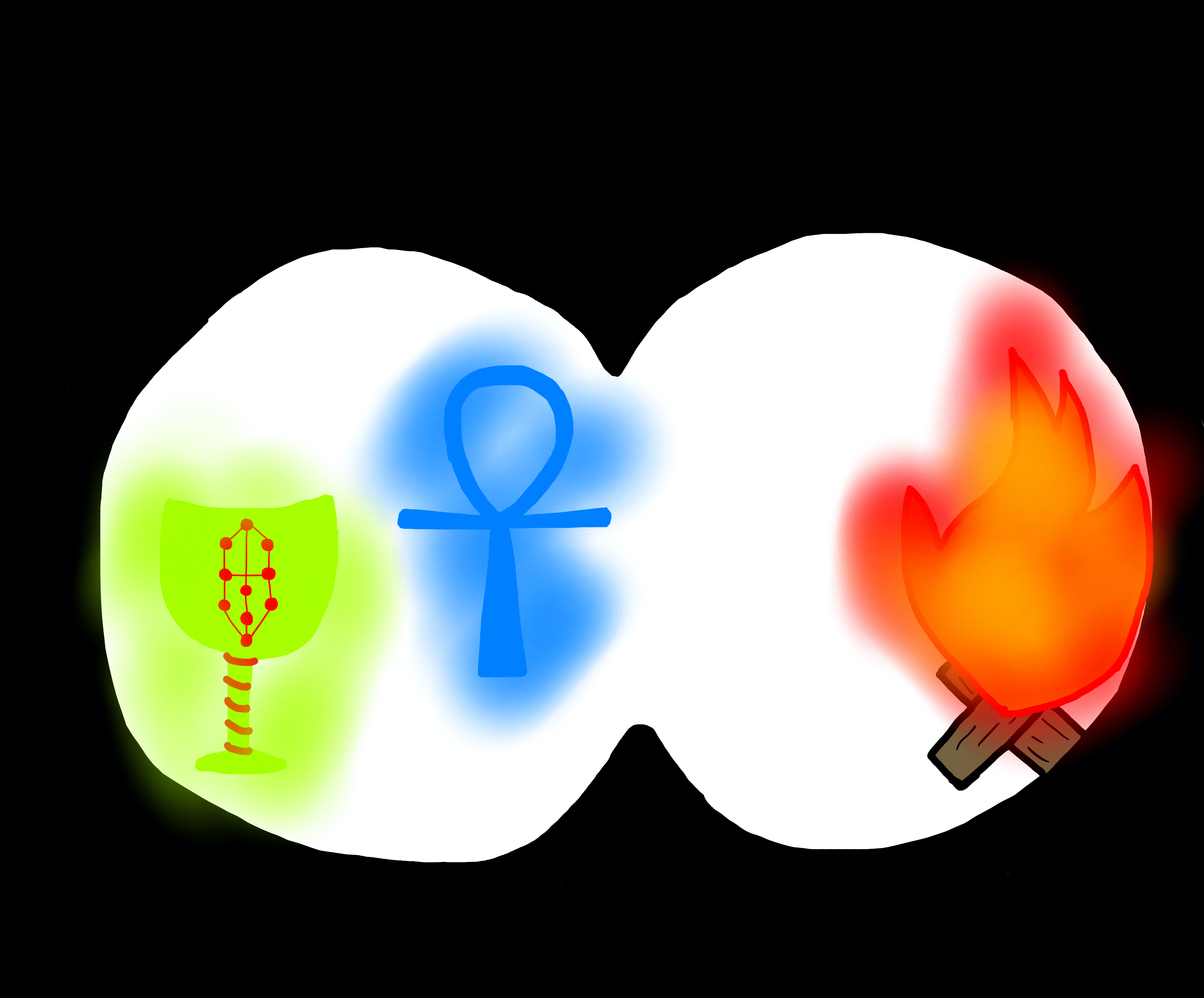 He is told that these are the true objects and beings, and what he had seen before casted on the wall was nothing but shadows. He can see these true objects more clearly now. As his eyes adjust to the light, the shadows become harder to distinguish. 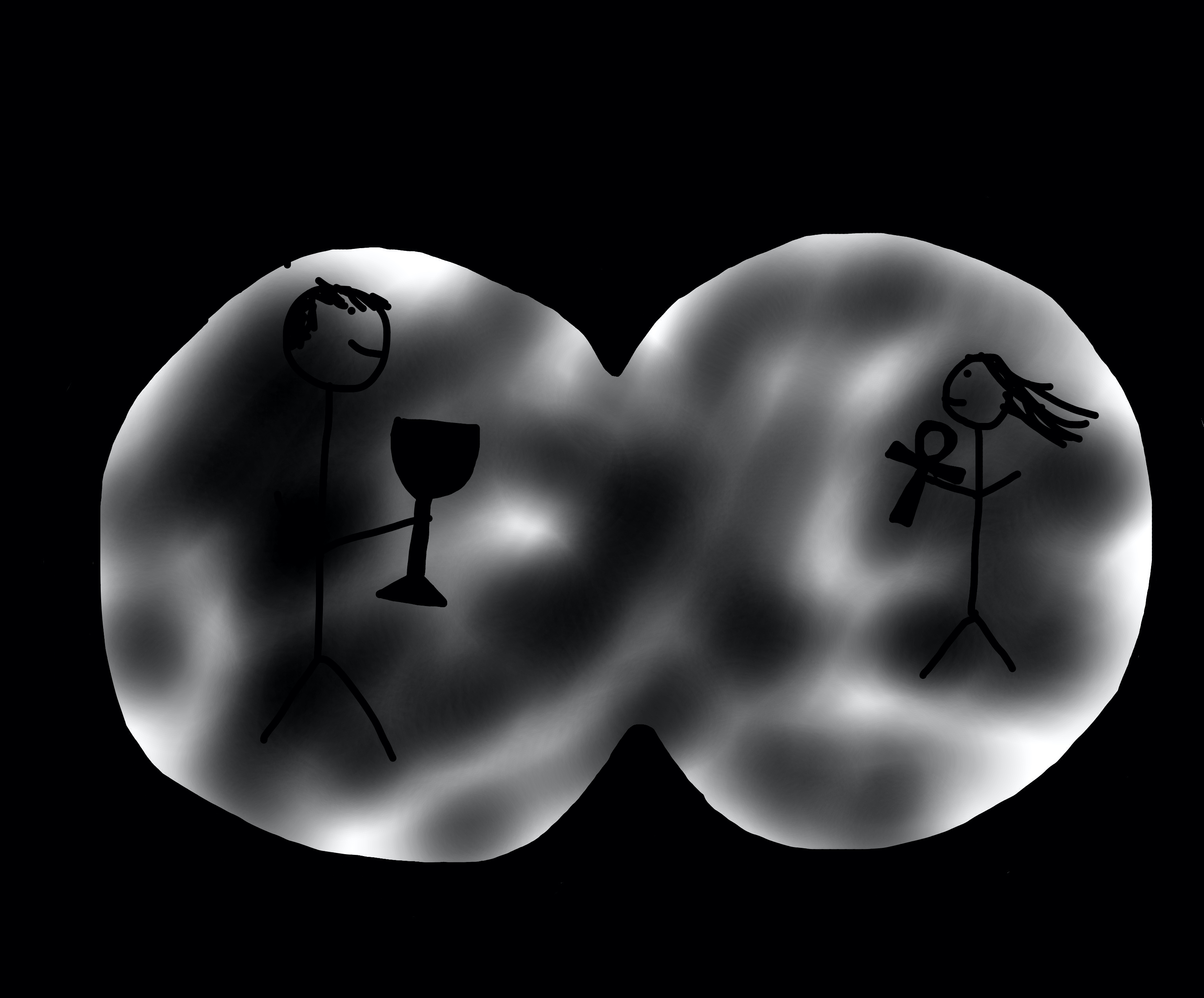 But the unshackled man’s journey is not finished. He is dragged out of the cave completely. No longer is the fire providing the light for him to see. It is the sun that lights the world outside the cave.

The man is blinded. 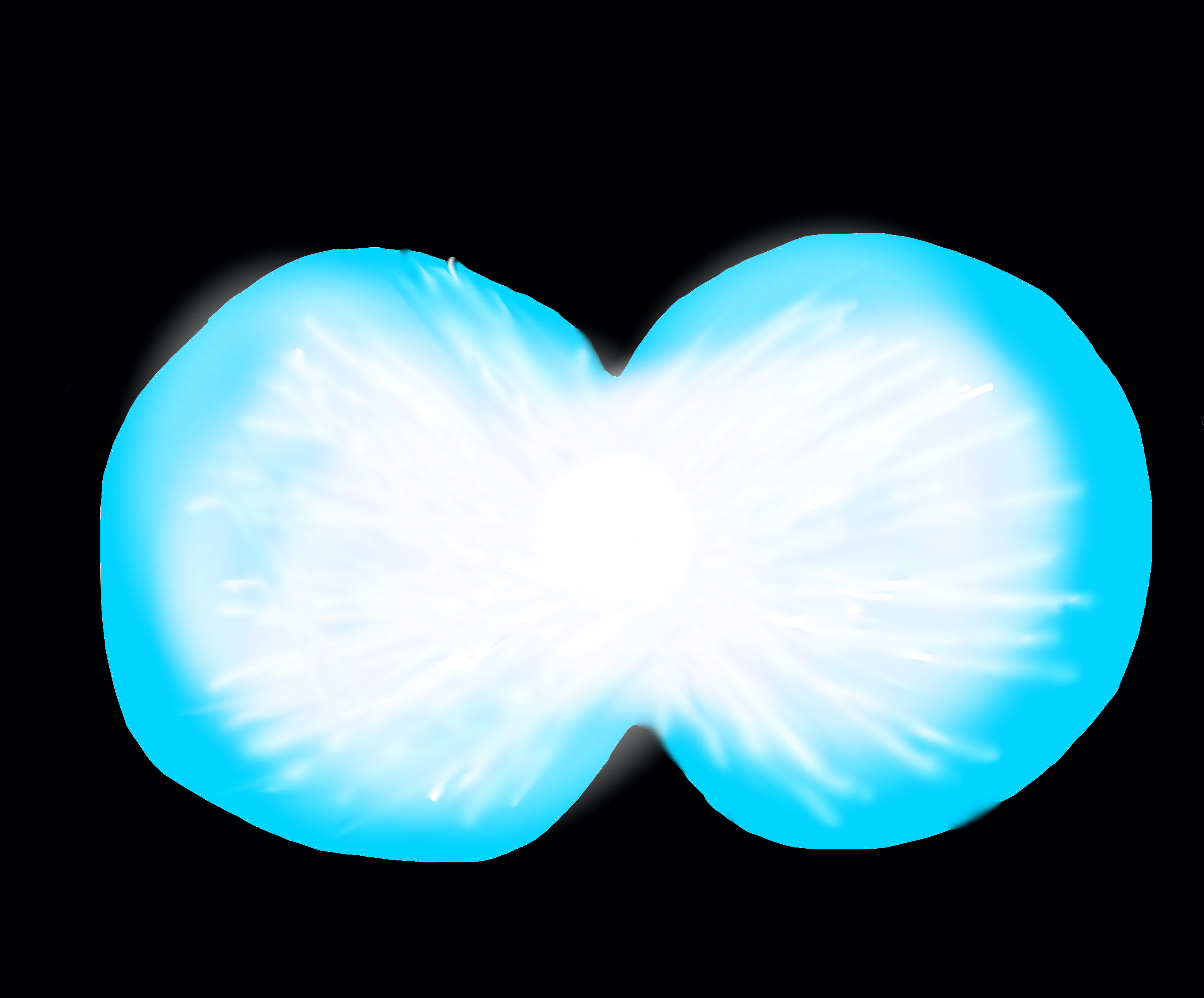 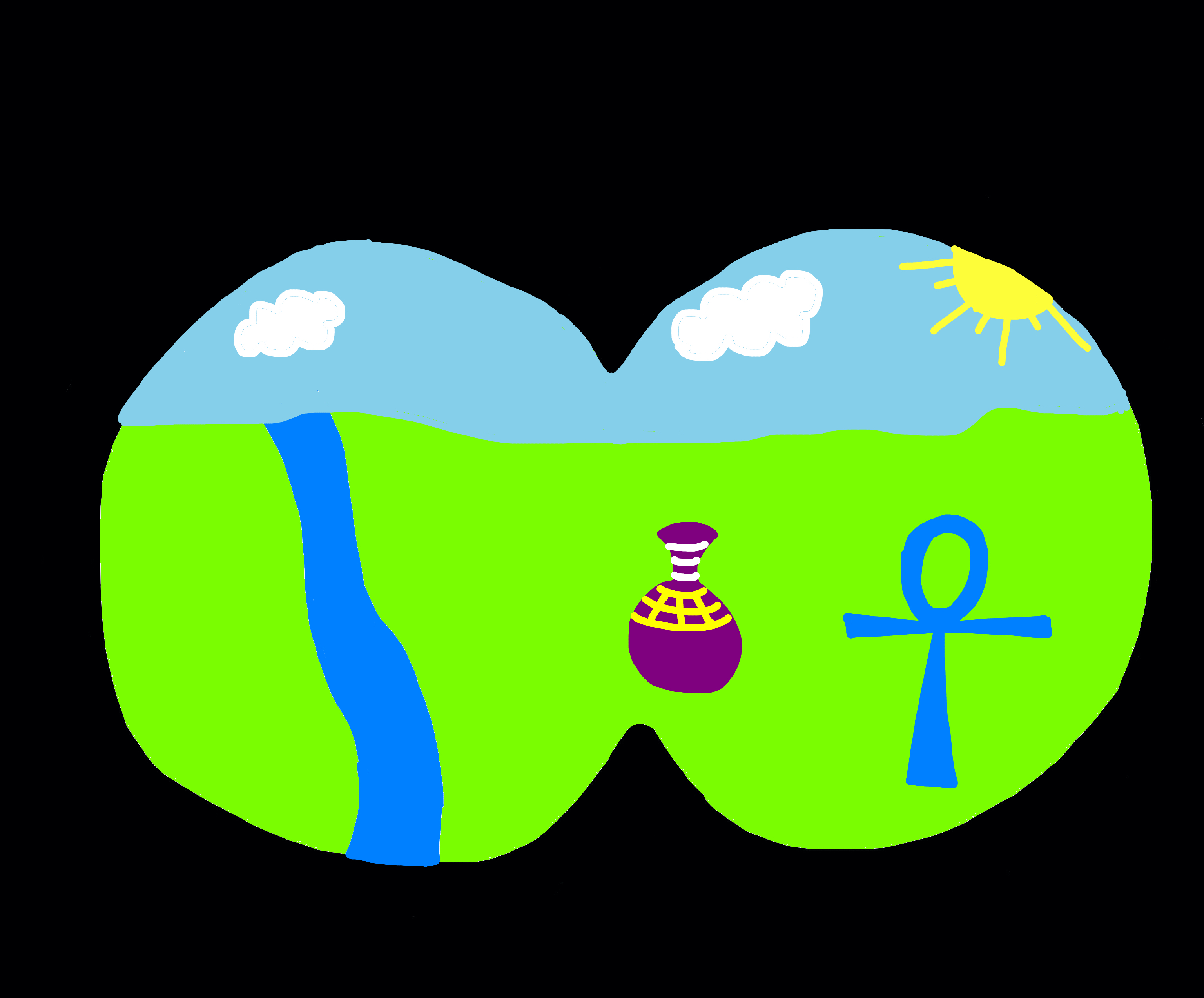 A stunning illumination like this would cause the man to feel pity for the people down in the cave. Shackled. Unable to see the true beauty of reality.

However, upon returning to the cave, he would be reminded that inside the cave, there are honors, praise, and prestige granted to the cave-dwellers who could best predict what would happen to the shadows. Commendations are given to those who can see the shadows most clearly.

The problem? Once your eyes have adjusted to the light from the sun, it is difficult to perceive the shadows with clarity. 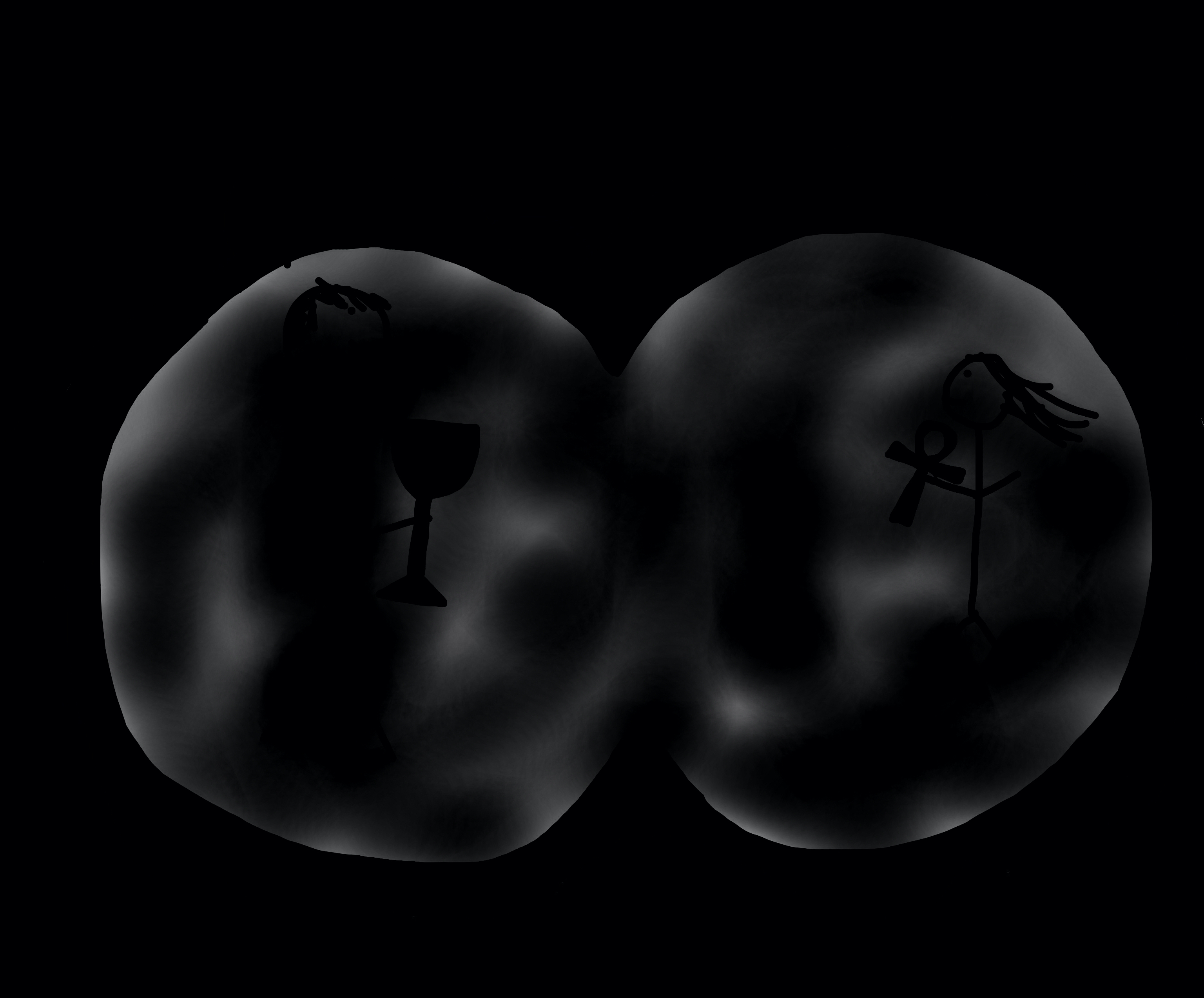 However, once one has seen the sun, you no longer envy those cave-dwellers who are best at predicting the shadows and you no longer strive for the acceptance of the shackled cave-dwellers’ opinions. You’ve seen something beyond the reality of shadows.

Upon regaining clarity in the shadow world, the man would be ridiculed by the cave-dwellers for his inability to see the shadows. For his lack of desire to play the shadow status games. The cave-dwellers would believe he had ruined his eyesight by exiting the cave. They would say that by staring at the sun, he had gone blind.

He would try to get the other cave-dwellers to unshackle themselves and see what he saw, but the cave-dwellers won’t want to go. And if they can get ahold of the man who saw outside the cave, they will surely kill him.

What could Plato mean?

Plato is very clear about one thing: most people don’t understand reality. The world we think we live in, the beliefs we hold as truth, our belief of reality, is nothing more than the shadow of truth.

But what is he talking about?

Is he saying there is a political ruling class who controls our reality and function as puppeteers, weaving a narrative for the masses? Was he simply making reference to a lack of true education among the masses, highlighting that it is only the philosophers who are educated enough to understand how the world works? Did he somehow foreshadow TVs and the internet around 400 B.C. and was trying to tell us that memes are the way to truth? 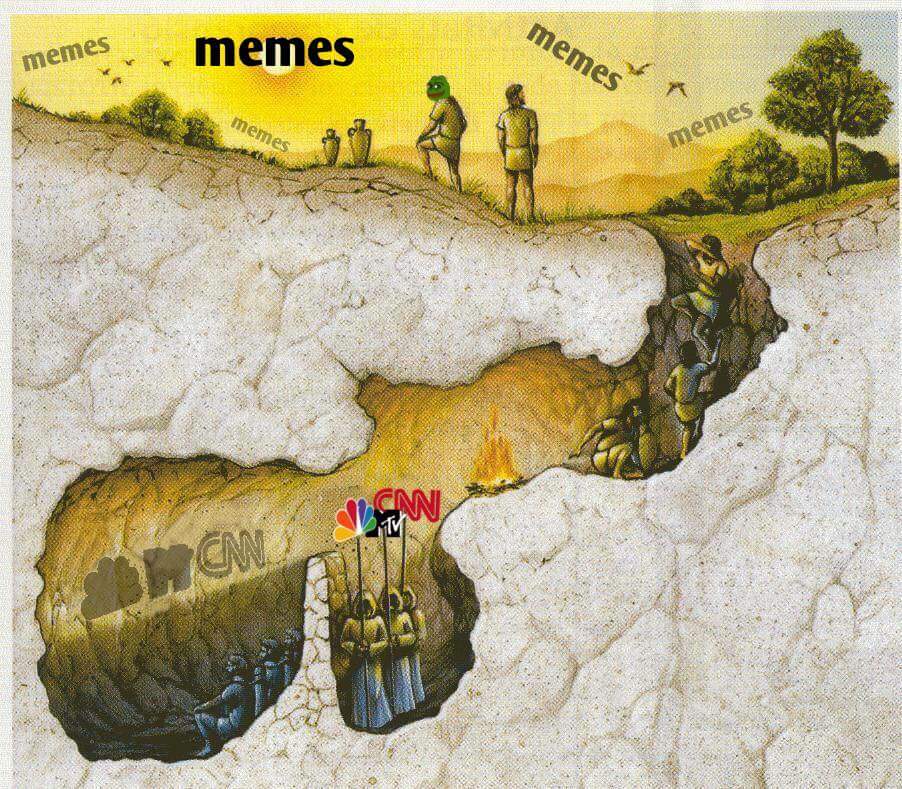 Nobody really knows, if we’re being honest.

But through studying some of Plato’s other ideas, we can come up with some interesting guesses.

Plato developed the Theory of Forms. In his theory, he states that there are two realms to reality: the physical realm and the spiritual realm. The physical realm is ever-changing. It is the world in which we live. Seasons come. Season go. Buildings are built. Buildings crumble. People are born, and people die. Because it is always changing, it is unrealiable.

But that’s not the only realm of existence. Plato’s theory also includes the spiritual realm, which is where you find the Forms (capital F). The Forms are perfect representations of everything here on Earth. A dog, for instance, has it’s perfect Form in the spiritual realm. It doesn’t lose it’s shit when the mailman knocks on the door (probably). The Dog Form is loyal and kind, never stealing steak off your plate when you go to refill your water.

Humans have a Form too. An ideal. So do squares, triangles, tallness, goodness, tables, and chairs. Plus everything else ever.

So maybe what Plato is doing with the Allegory of the Cave is saying, “Hey everyone…check it out. There’s another realm, the spiritual realm, where more perfect representations exist of what we see here on Earth. In the spiritual realm, there’s a perfect bacon, egg, and cheese, and us humans are constantly trying to recreate that Form by putting ours on bagels or biscuits, using American cheese or pepper jack. Always an imitation of the perfect Form, but never an exact match. Ya feel me?”

Okay, Plato, I can buy that.

But how did Plato even come up with this?

Though we don’t have a play-by-play account of how Plato came up with his Theory of Forms, there is one yearly event we know he attended that can potentially give us some guidance: The Eleusinian Mysteries.

The Eleusinian Mysteries were a series of initiations held every year in Greece. Known as the, “most famous of the secret religious rites of Greece,” the Mysteries were attended by: Plato, Socrates, Aristotle, Sophocles, Plutarch, Cicero, and many other philosophers and ancients whose names still live on today.

During the initiation portion of these Mysteries, initiates were required to drink a potion called Kykeon, which many historians believe to have had a psychedelic component to it. Why do they think these philosophers got together and drank psychedelics?

Plato, in Phaedo (his work about the immortal soul), says of the Mysteries:

With a blessed company—we following in the train of Zeus, and others in that of some other god...saw the blessed sight and vision and were initiated into that which is rightly called the most blessed of mysteries, which we celebrated in a state of perfection...being permitted as initiates to the sight of perfect and simple and calm and happy apparitions, which we saw in the pure light, being ourselves pure and not entombed in this which we carry about with us and call the body, in which we are imprisoned like an oyster in its shell.

When a man dies he is like those who are initiated into the mysteries. Our whole life is a journey by tortuous ways without outlet. At the moment of quitting it come terrors, shuddering fear, amazement. Then a light that moves to meet you, pure meadows that receive you, songs and dances and holy apparitions.

Cicero, described the Mysteries as:

For among the many excellent and indeed divine institutions which your Athens has brought forth and contributed to human life, none, in my opinion, is better than those mysteries. For by their means we have been brought out of our barbarous and savage mode of life and educated and refined to a state of civilization; and as the rites are called "initiations," so in very truth we have learned from them the beginnings of life, and have gained the power not only to live happily, but also to die with a better hope.

So all these super-sharp philosophers go to Eleusis, become initiated by drinking some drink, and they all have spiritual episodes that reduce their fear of death, induce out of body experiences, and give them an understanding of how life began?

Sounds to me like a bunch of hippies on psychedelics.

But these are the world’s greatest philosophers, whose work has withstood the test of time for thousands of years. Is it possible some of their most popular theories came straight from psychedelic trips?

Again, I could be wrong, but it seems to me that Plato thinks all of us here on Earth are the ones chained inside the cave. We’re seeing a reality, but it’s the physical reality. The unreliable, physical reality which allows us only to see the imperfect representations of the spiritual Forms.

being permitted as initiates to the sight of perfect and simple and calm and happy apparitions, which we saw in the pure light

he’s discussing what he saw while drinking Kykeon. He’s telling us about his trip outside the cave.

When this first dawned on me, my immediate reaction was to ask why Plato didn’t just tell us all to take psychedelics and free ourselves from the shackles of our cave? If he was really on psychedelics, and the goal of anyone who sees outside the cave is to inform those who are still shackled, why didn’t he let us in on his little secret in a direct, obvious way.

First of all, the Eleusinian Mysteries were a secret initiation. It was forbidden to speak of what happened during the ceremonies, and doing so would bar Plato from ever partaking again.

Secondly, psychedelics have an interesting feature where they cause people who consume them to question authority. Had Plato touted the use of psychedelics in a “Timothy Leary – Turn On, Tune In, Drop Out” kind of way, his work wouldn’t have withstood the test of time like it did. Plato’s work would have been destroyed by authorities in a desire to keep the current structure in place.

So, Plato created allegories and theories that would allow the curious explorer to understand what he was saying, without ever having to directly say it. The Allegory of the Cave is a story of breaking away from the chains locking you into reality. It’s a call to action for those listening.

Sounds to me like we need to take a closer look at psychedelics.

In the next month or so, I’ll be taking a deeper dive later on the history of psychedelics, medicinal aspects, and why (outside of microdosing in Silicon Valley), they seem to be somewhat of a taboo subject. If you’ve made it this far, you should probably sign up for my email list. I’ll let you know when new posts are coming your way:

Or if you'd rather not subscribe, take this quiz to test your skills in deciphering whether words came from an ancient philosopher or a famous psychonaut:

Who said it: Ancient Philosopher or Psychedelic Explorer?

Also, if you want to read Plato’s Allegory of the Cave for yourself and come up with your own interpretation, here’s a link.