Newtonian physics lead us to believe that, being the most highly developed intelligence on our planet, meant that we could design experiments to test our world objectively. We, The Evolved, had the ability to remove ourselves from experiments and judge the results to determine why things work the way they do.

When our super-evolved-scientists discovered that by observing the path of a photon through two slits in the famous Double Slit Experiment, the results of the experiment differed depending on whether they had an observation device as part of the experiment. This astounded many physicists.

If you aren’t sure what I’m talking about, you should probably start with my other article: Quantum Physics Is F*cking Nuts.

One of the bedrocks of science has always been that there is an objective reality that humans coexist in, and the scientist’s task was to uncover the rules of that reality. But upon the realization that the observer of an experiment influences the results, many basic truths needed to be reexamined.

So we learned that the observer can impact the results. But, what do we mean by “observer”?

According to Werner Heisenberg in Physics and Philosophy (1958):

It does not matter whether the observer is an apparatus or a human being; but the registration, i.e., the transition from the "possible" to the "actual," is absolutely necessary here and cannot be omitted from the interpretation of quantum theory.

When Heisenberg talks about the transition from the possible to the actual, he’s referencing that subatomic particles exist as probability clouds until the point of observation (the point that we measure them or look at them), and at that point, the probability clouds collapse into a particle and function just like Newtonian Physics tells us particles should function. They function just like world functions according to your 5th grade teacher. Everything is neat. Clean. There are rules. Everything follows those rules.

I’m going to walk you through the Quantum Eraser experiment step by step. First, let’s break down some of the pieces we’ll be using in our experiment to try and trick the photons into letting us know when they decided to become particles or waves:

Just like in the previous experiment, we're going to be shooting photons through a block that has two slits in it called The Double Slit. Our Double Slit has a hole on the left and another hole on the right (we call these holes "slits"). We will be taking note of whether the photon traveled through the left slit, the right slit, or both slits. 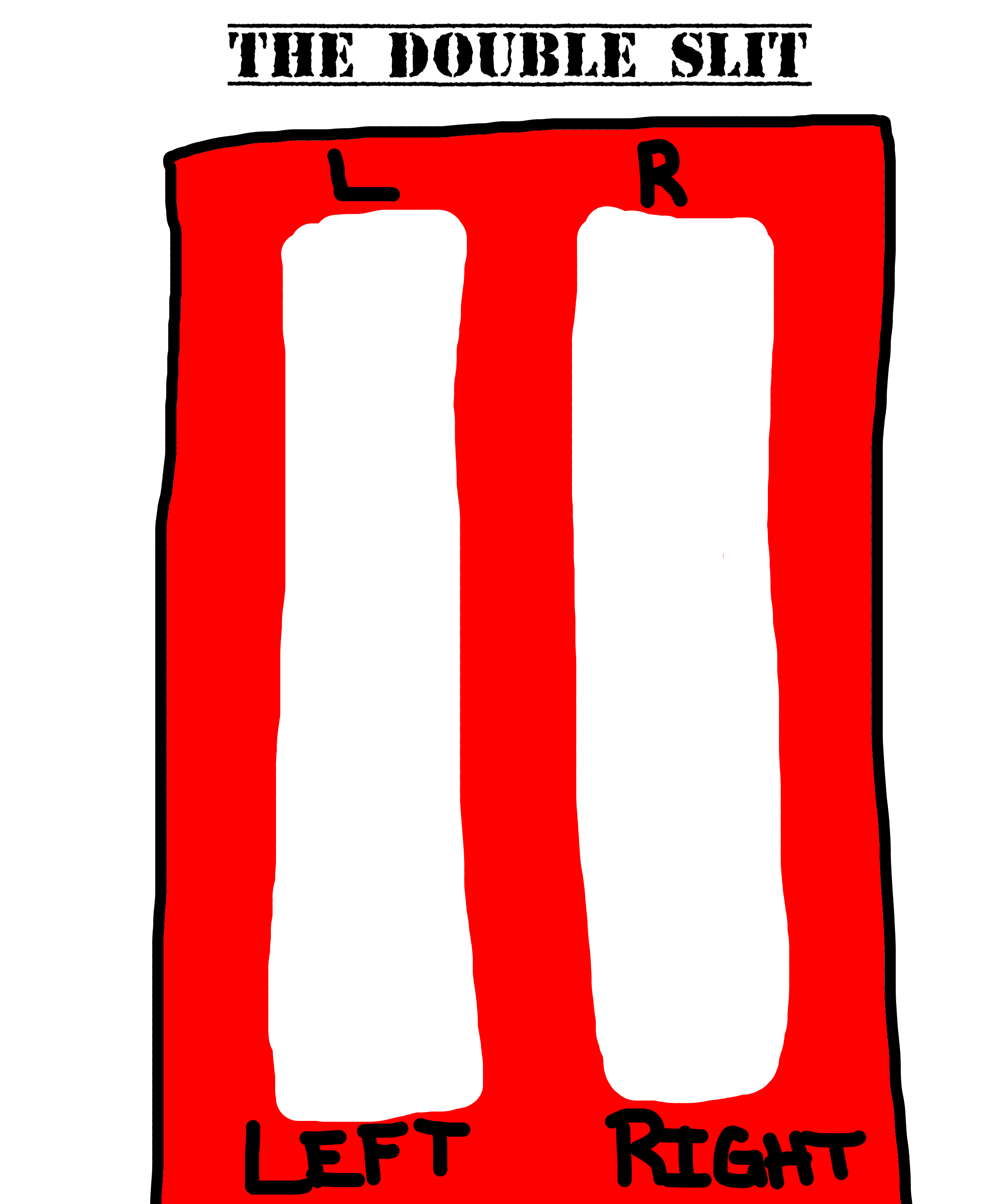 This is the same screen that we used in The Double Slit Experiment. What I'm about to say will make our physicists stomachs curl, but think of the Screen as a chalkboard. Every time a photon hits the chalkboard it makes a little dot of chalk telling us the location of where it hit the Screen. 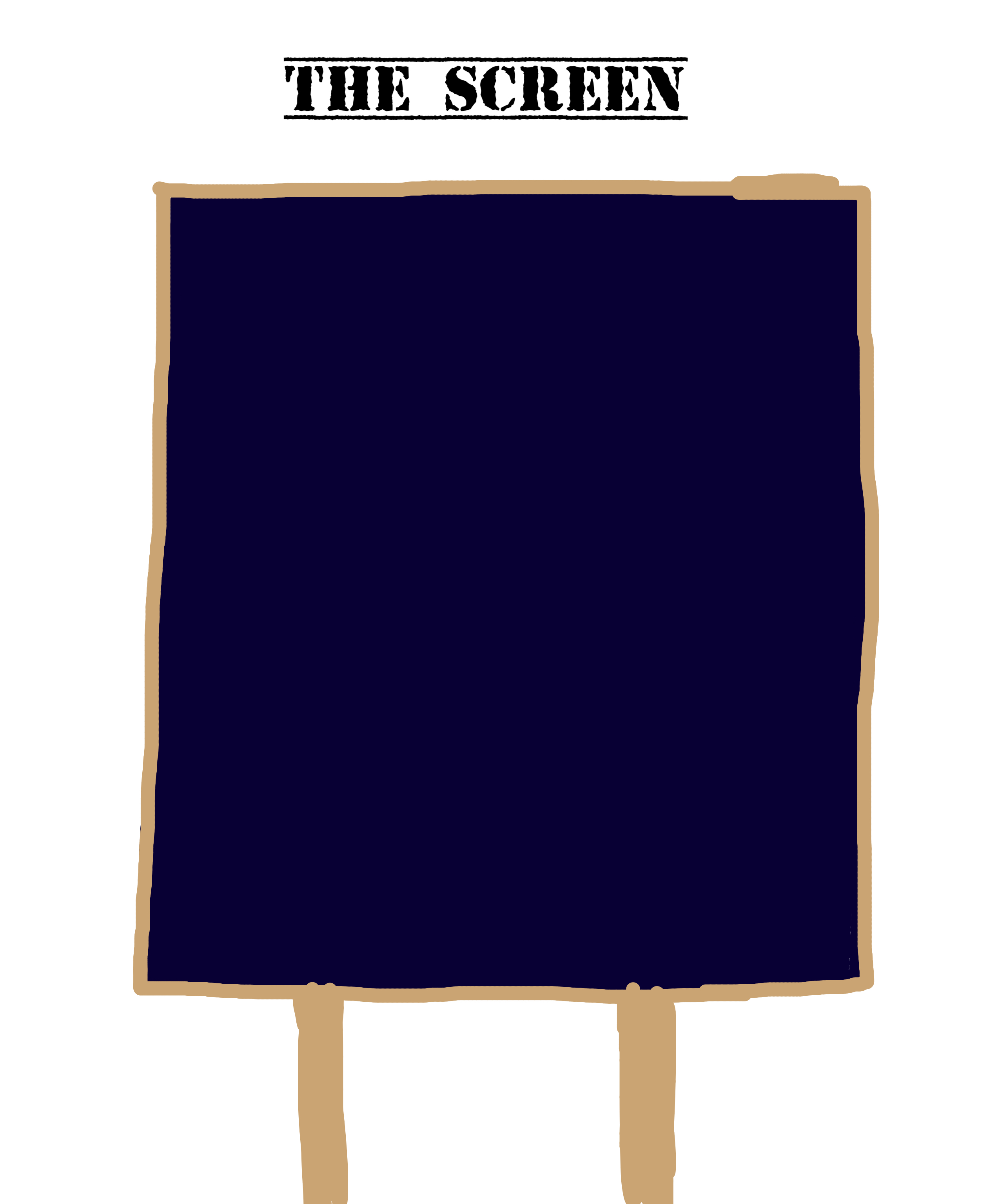 When the photons hit the screen, they’ll form one of two patterns:

The Wave Pattern tells us that, throughout our experiment, the photon traveled as a probability wave. This is the pattern we see in The Double Slit Experiment when we don't put an observation device on the slits. 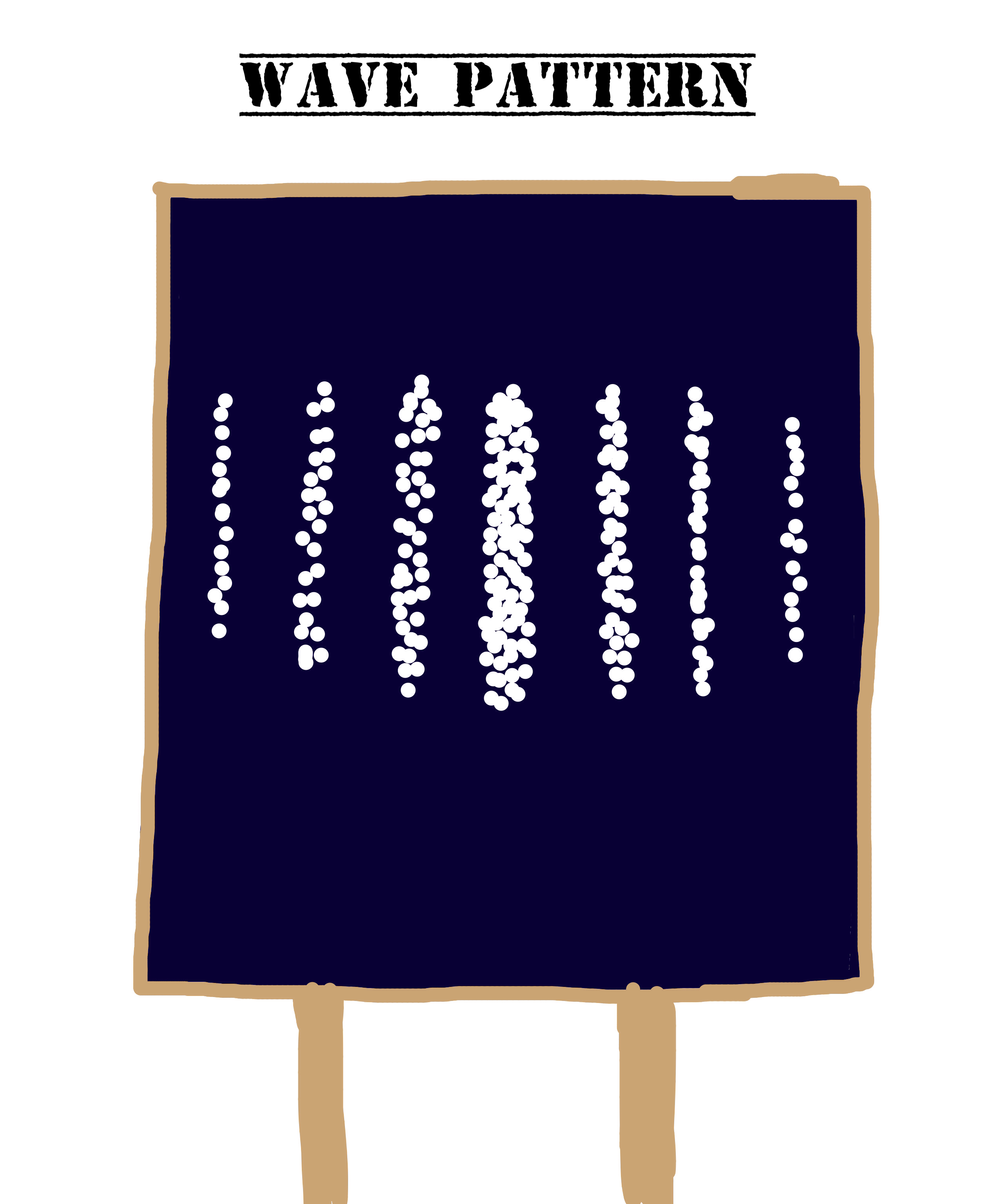 The Particle Pattern tells us that the photon acted like a particle throughout our experiment. When I say particle, you can think: tiny tennis ball. So the photon was shot towards our Double Slit, went through one of the slits, and made a mark on the screen (our chalkboard). 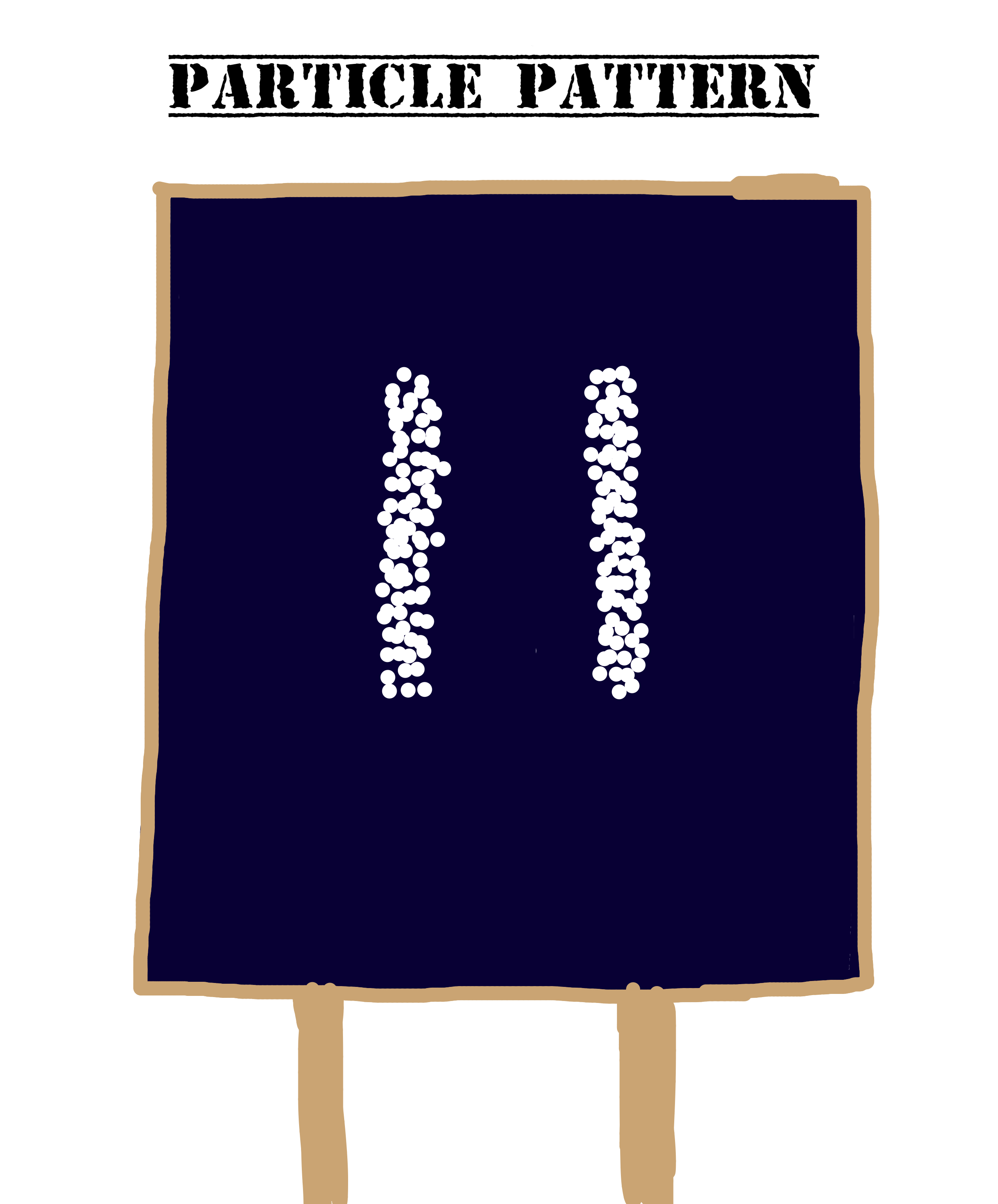 Unlike in The Double Slit Experiment, we've now added another component. This is a super special splitting crystal that is able to take a photon and split it into mini, identical twins. Photon Twins! Each photon is entangled to its twin, and has half the energy as the original photon. We'll put this crystal right behind our Double Slit and split the photon into two right after it passes through the Double Slit. 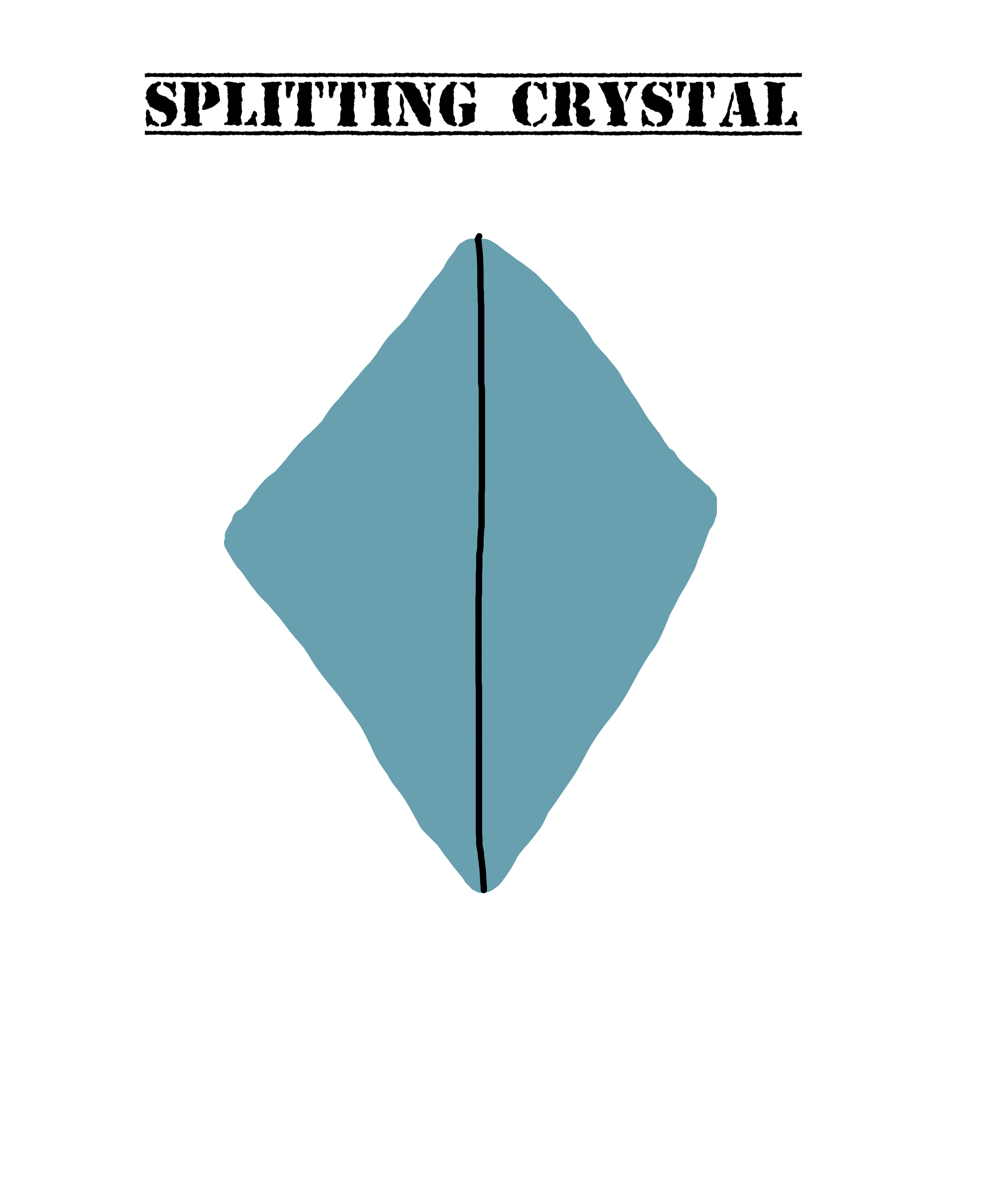 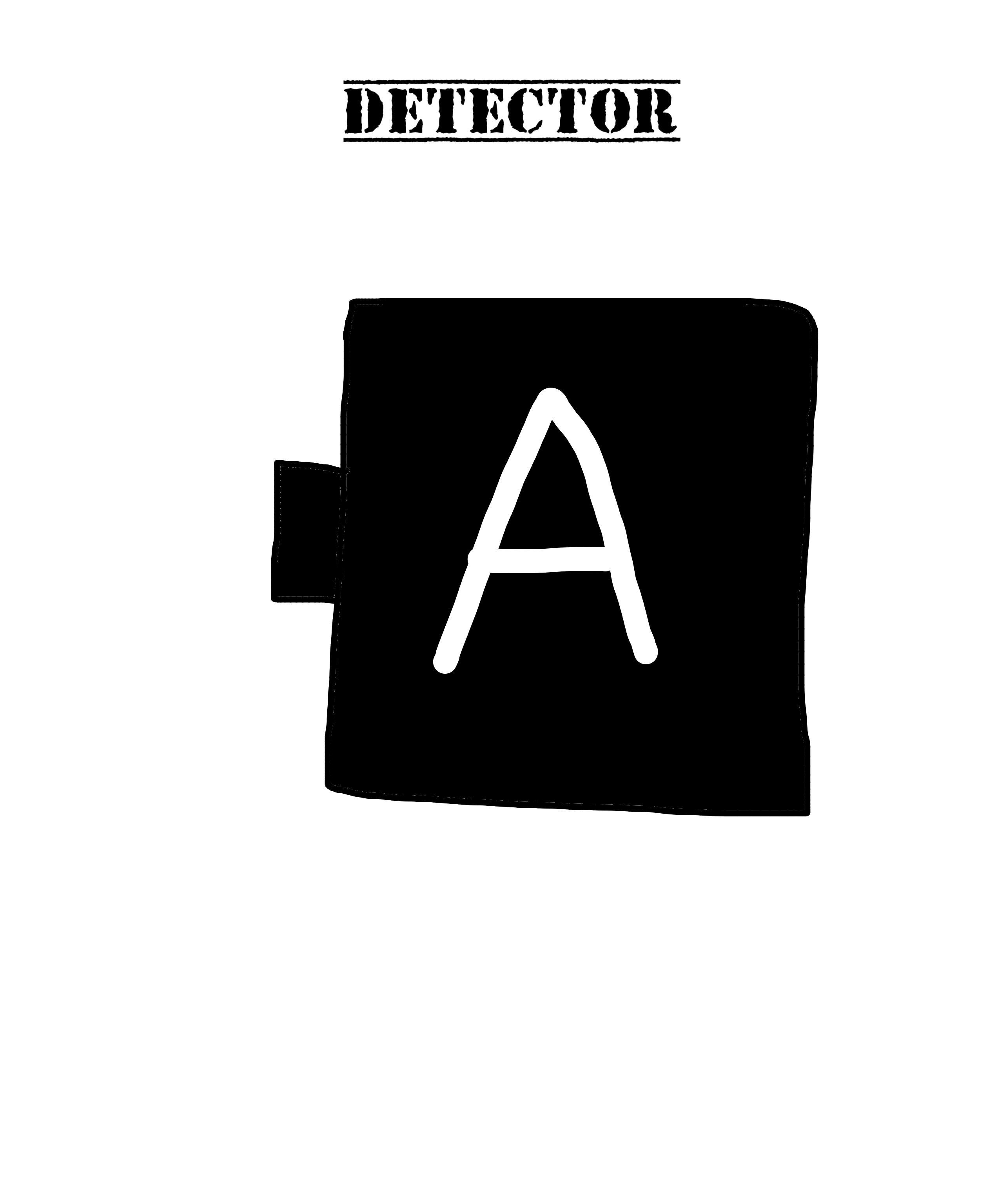 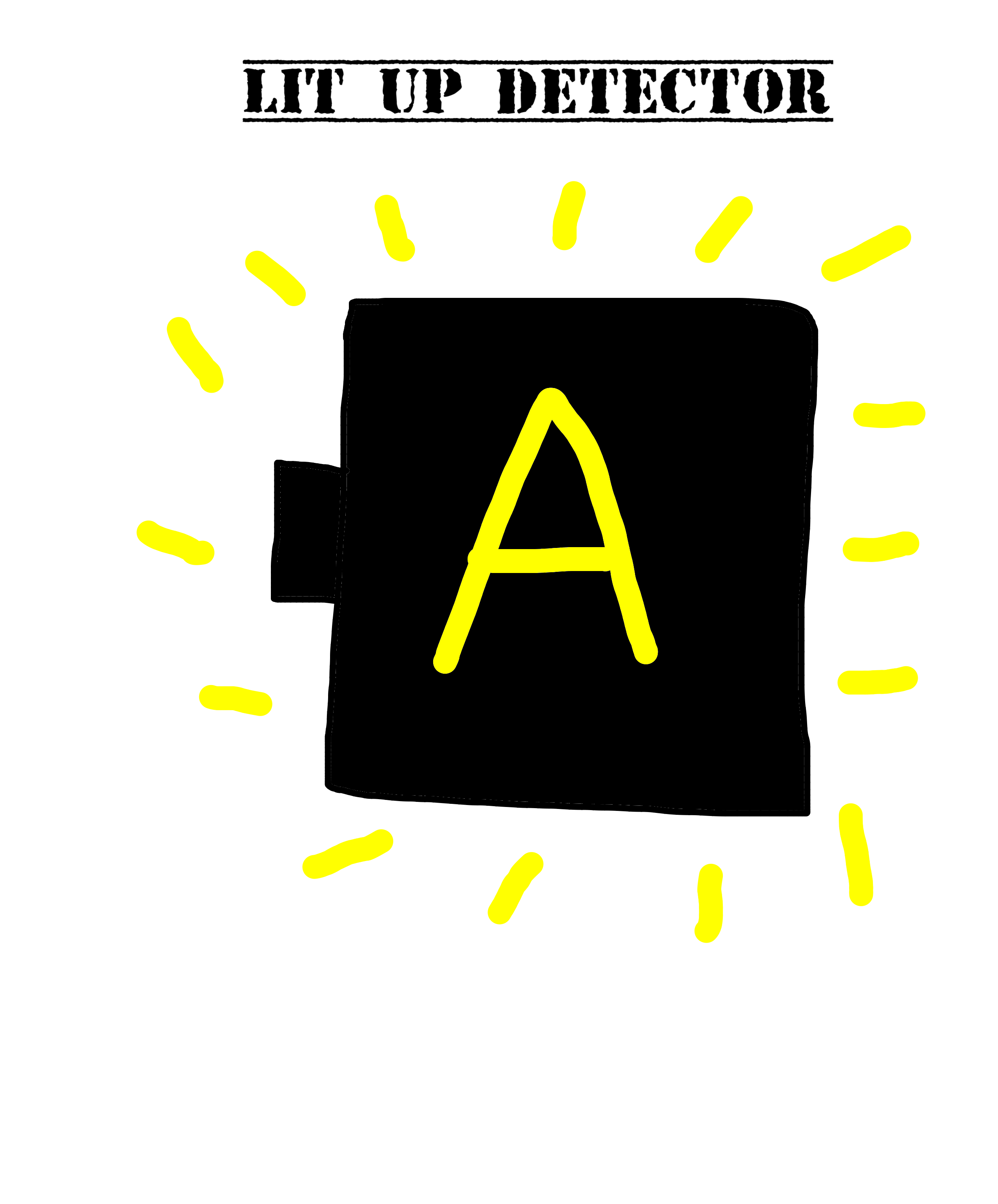 The last addition to our experiment is a series of 50/50 mirrors. 50% of the time, the mirror will let a photon pass straight through it and 50% of the time it will redirect the photon like a tennis ball bouncing off a wall.

Sidenote: In the later part of this experiment, we’ll add two 100% mirrors that will redirect the photon 100% of the time. 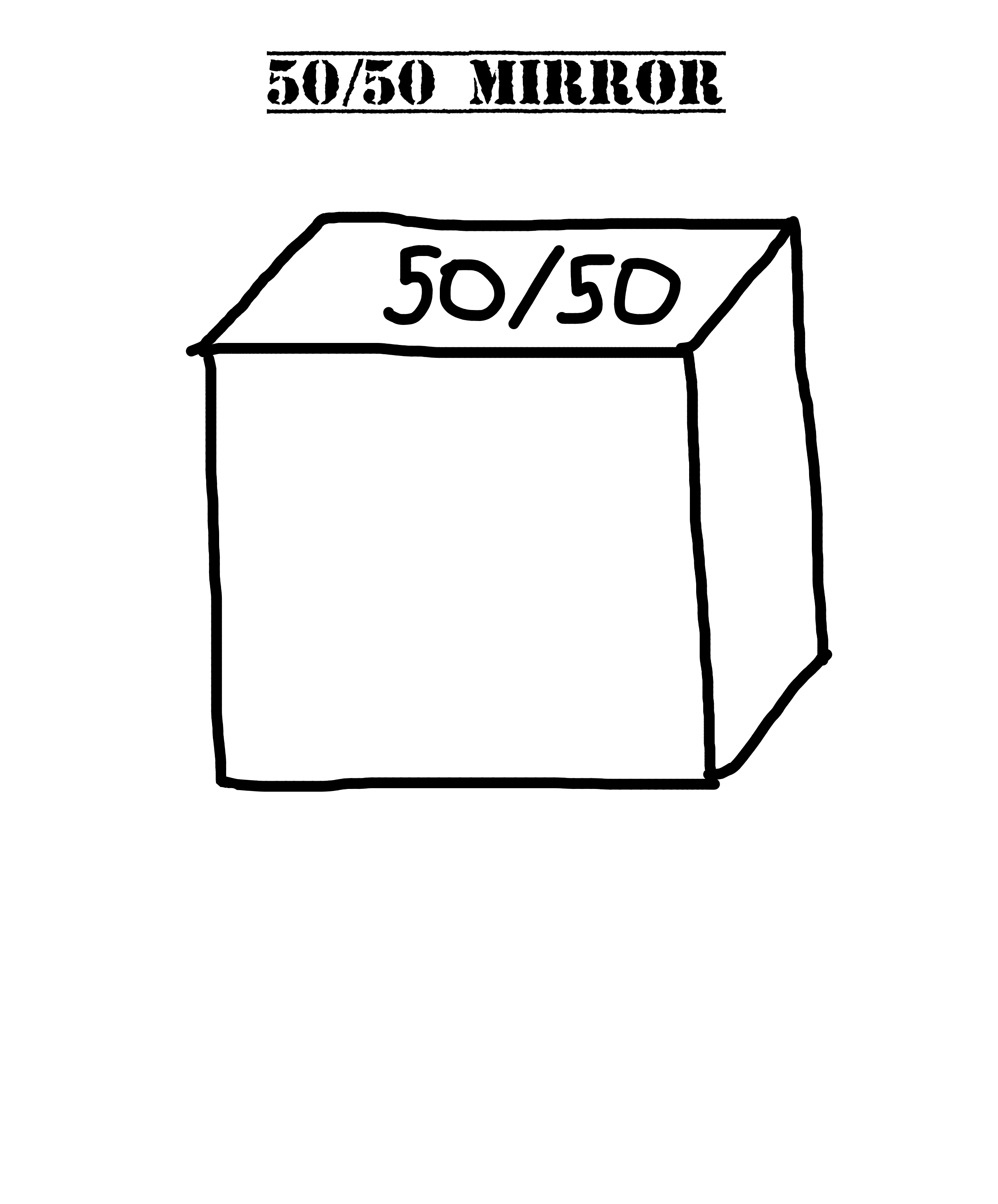 So now that we have all the pieces, let’s see our experiment in action. We shoot a photon through the Double Slit. We don’t know which slit it will go through, it is random. When the photon passes through the Double Slit, it hits the crystal and splits into two mini-photons. One photon goes to the screen at the top, while the other photon goes into one of the two detectors.

This is what happens to a SINGLE photon that goes through the left slit: 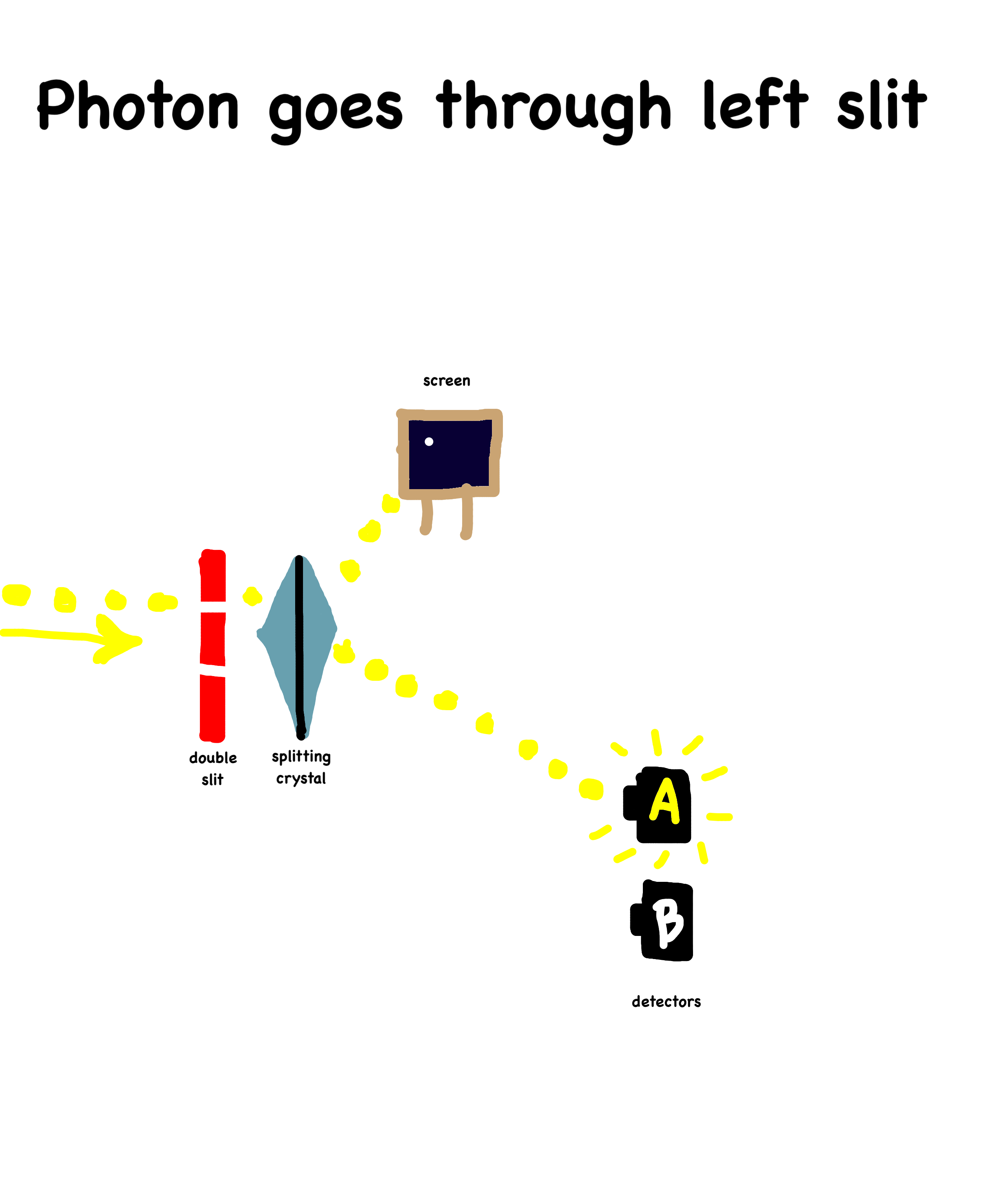 This is what happens when a SINGLE photon goes through the right slit: 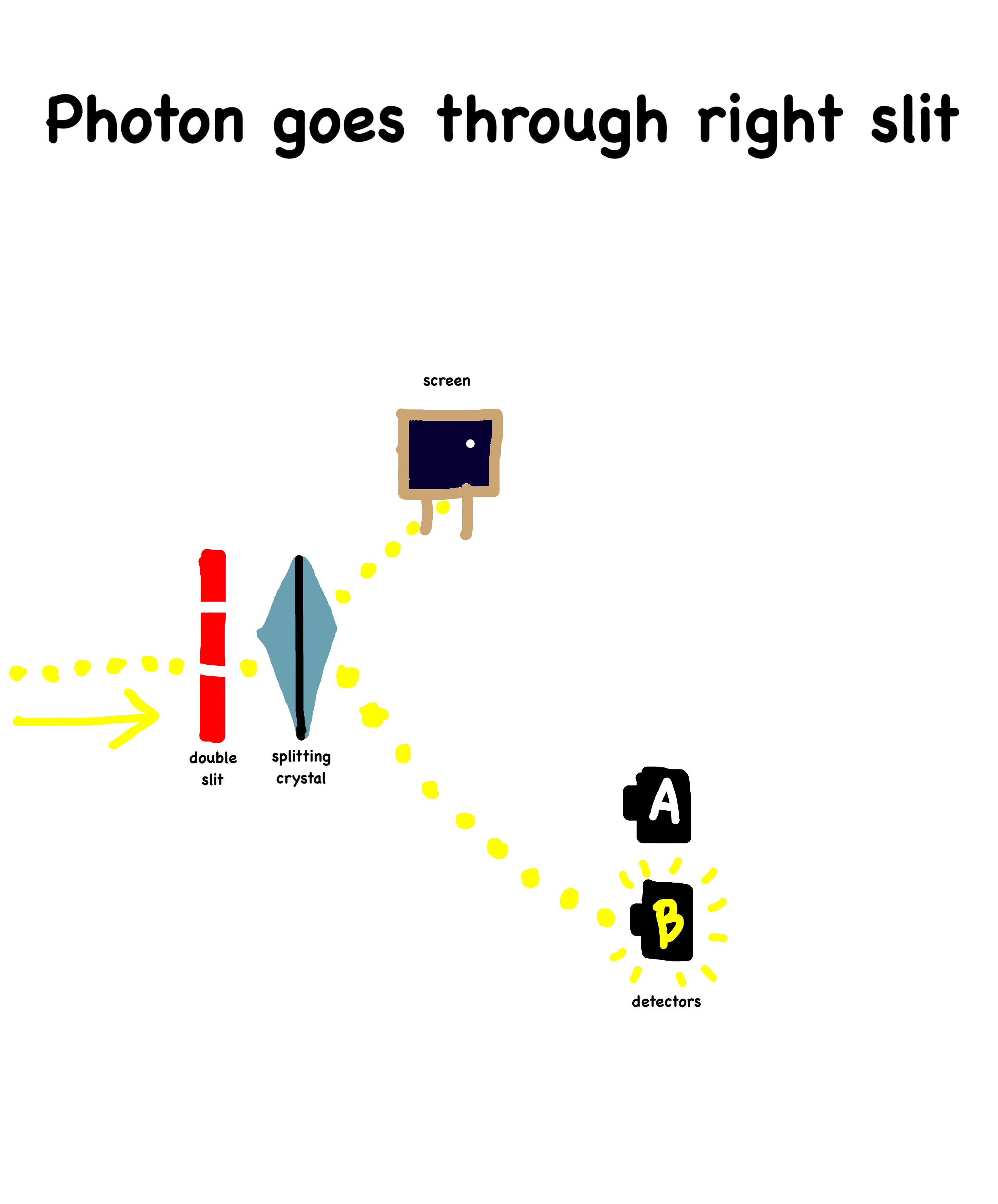 A couple of things to note:

If we were to run this experiment over and over again and save all the results on the screen, we would end up with a screen that shows the Particle Pattern:

Now, I can hear you thinking:

Yo TP, what about when the photon goes through the Double Slit as a wave and forms that Wave Pattern? That way we don't know whether it went through the left or right slit – it kinda goes through both if it's a wave. What happens in our experiment then?

Well, my friend, that never happens in this experiment. It’s like when we set up the observation device on the Double Slit, we always get the Particle Pattern.

You may be saying,

Okay, that's actually not surprising since we have these detectors set up.

And you’d be right. It’s not that surprising, but one thing we haven’t really discussed is that the Screen is a lot closer to the Splitting Crystal than the Detectors are. So the photon-twin heading towards the Screen actually hit the Screen before its twin hit the Detectors. However, the photon-twin who hit the screen never forms that Wave Pattern, it always shows the Particle Pattern. How does it know that it’s buddy is going to hit a detector before the buddy hits the detector?

That’s a good question and is a little tricky. Before we dive into that, let’s amp this up a little and make things REALLY weird.

Here’s a new picture of our setup: 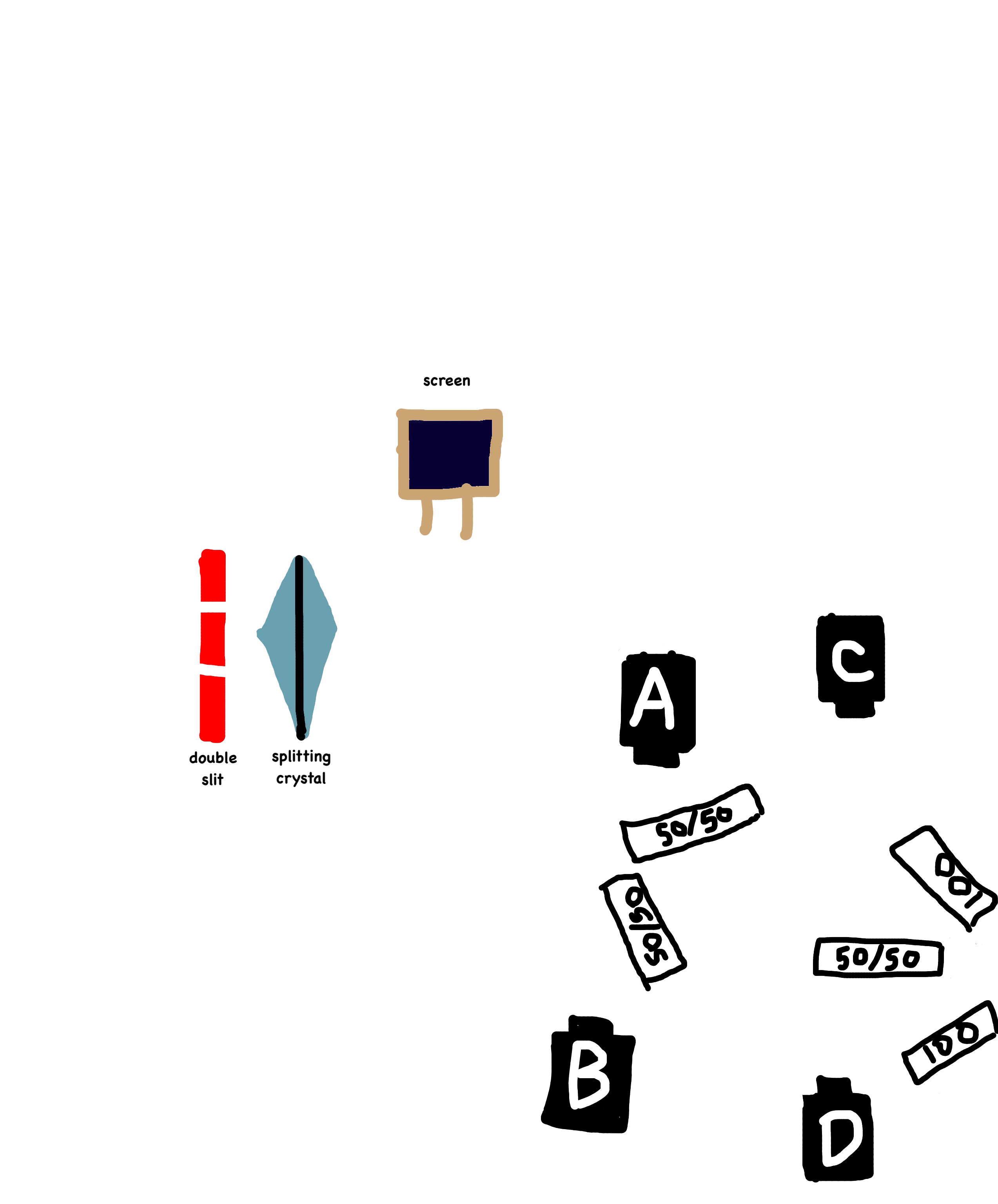 Notice that we’ve added two new Detectors: C and D. These function just like A and B and light up when the photon enters them.

We’ve also added like a million of those mirrors. It may look confusing at first, but remember that the 50/50 Mirrors let the photon through like an open window 50% of the time and 50% of the time, the mirror deflects the photon like a tennis ball hitting a wall.

We’ve also added a couple of 100 Mirrors. These always function like a wall deflecting a tennis ball. They are just here to redirect photons through a second 50/50 Mirror to make it impossible for us to know whether the photon went through the left or right slit (more on this later).

Let’s run through some of the scenarios. When a photon goes through the left slit, and Detector A lights up, that’s the same situation we saw in our last experiment. We get a white dot on the left side of our Screen, and all is normal. 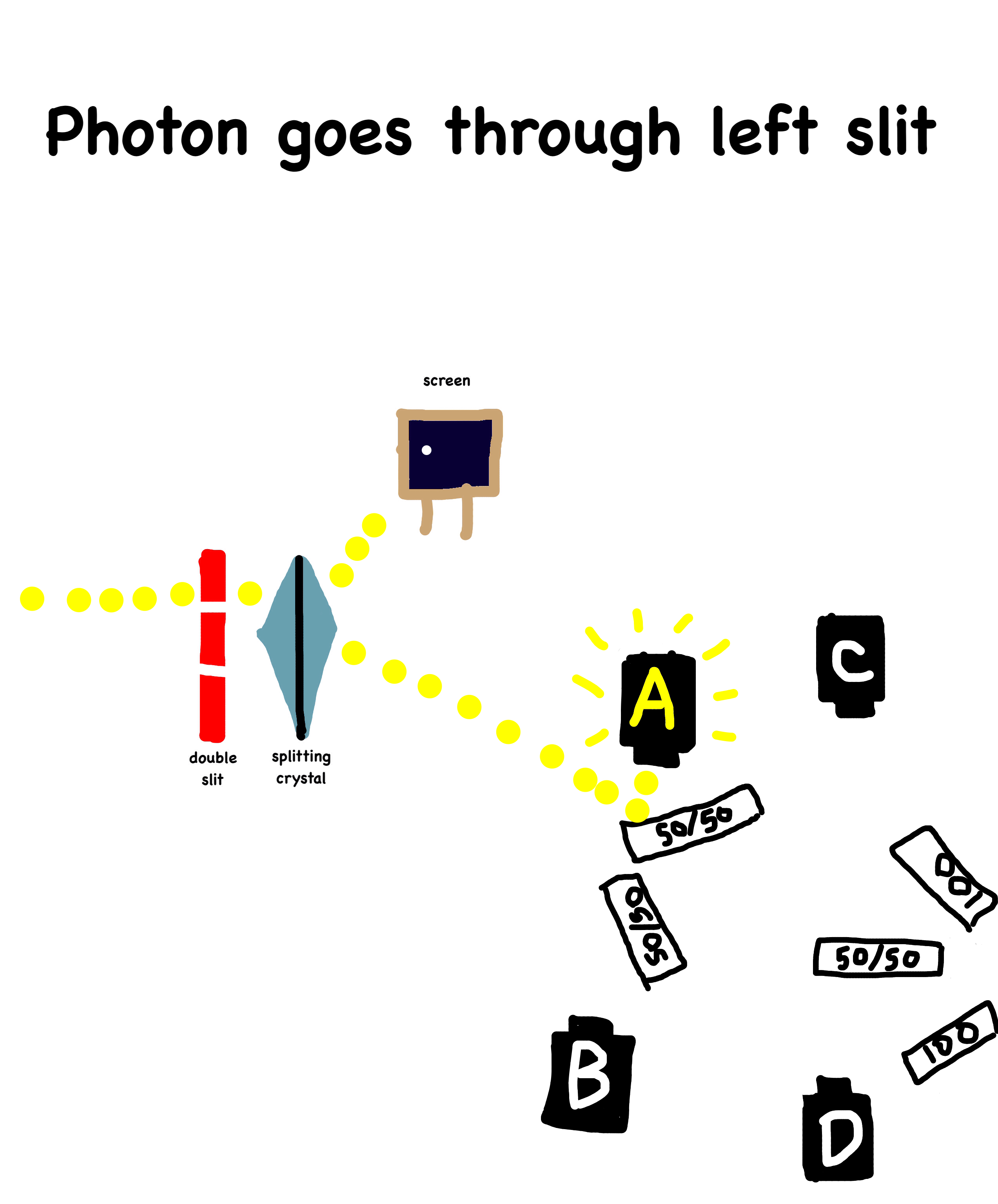 Same thing happens for a photon going through the right slit and lighting up Detector B. 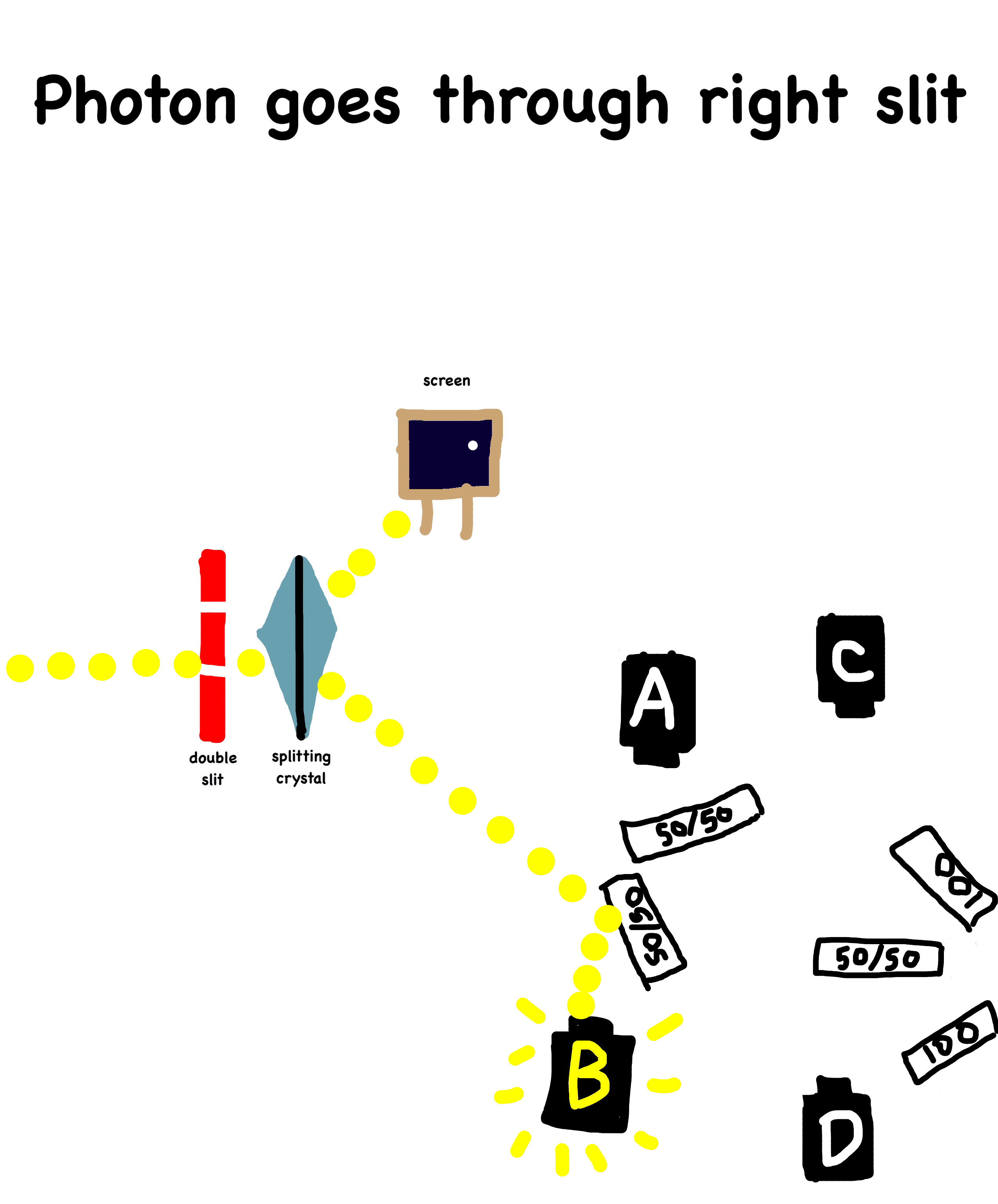 So 100% of the time, if Detector A or B lights up, we get the Particle Pattern on our screen, and we know whether the photon went through the left or right slit.

If the 50/50 Detector near Detector A let’s the photon go through it, then either Detector C or D will light up. Let’s look at some scenarios.

Photon goes through the left slit, and Detector C lights up: 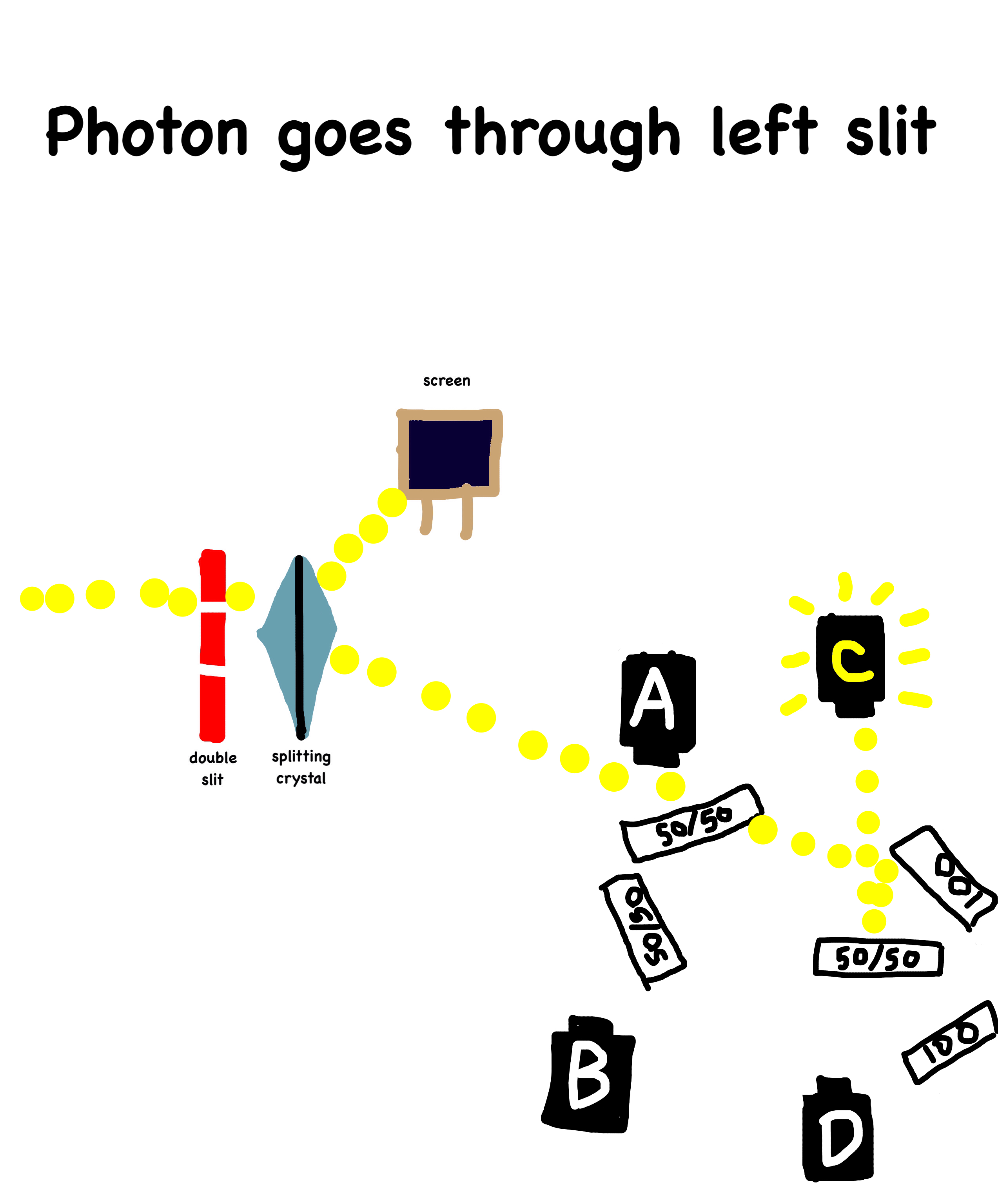 Photon goes through the left slit, and Detector D lights up: 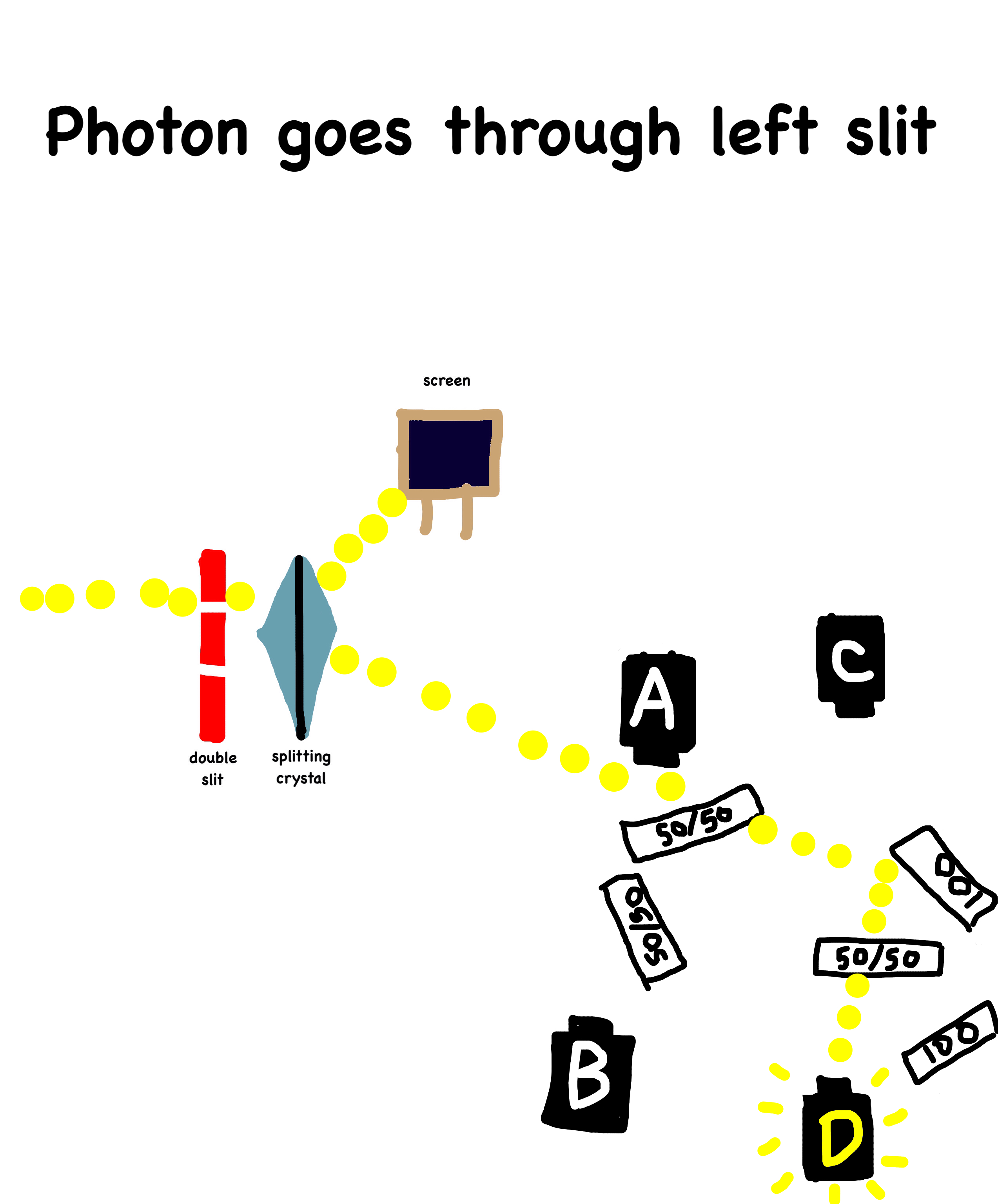 Just like the last 2 examples, if the 50/50 Detector near Detector B let’s the photon go through it, then either Detector C or D will light up. Let’s look at some scenarios.

Photon goes through the RIGHT slit, and Detector C lights up: 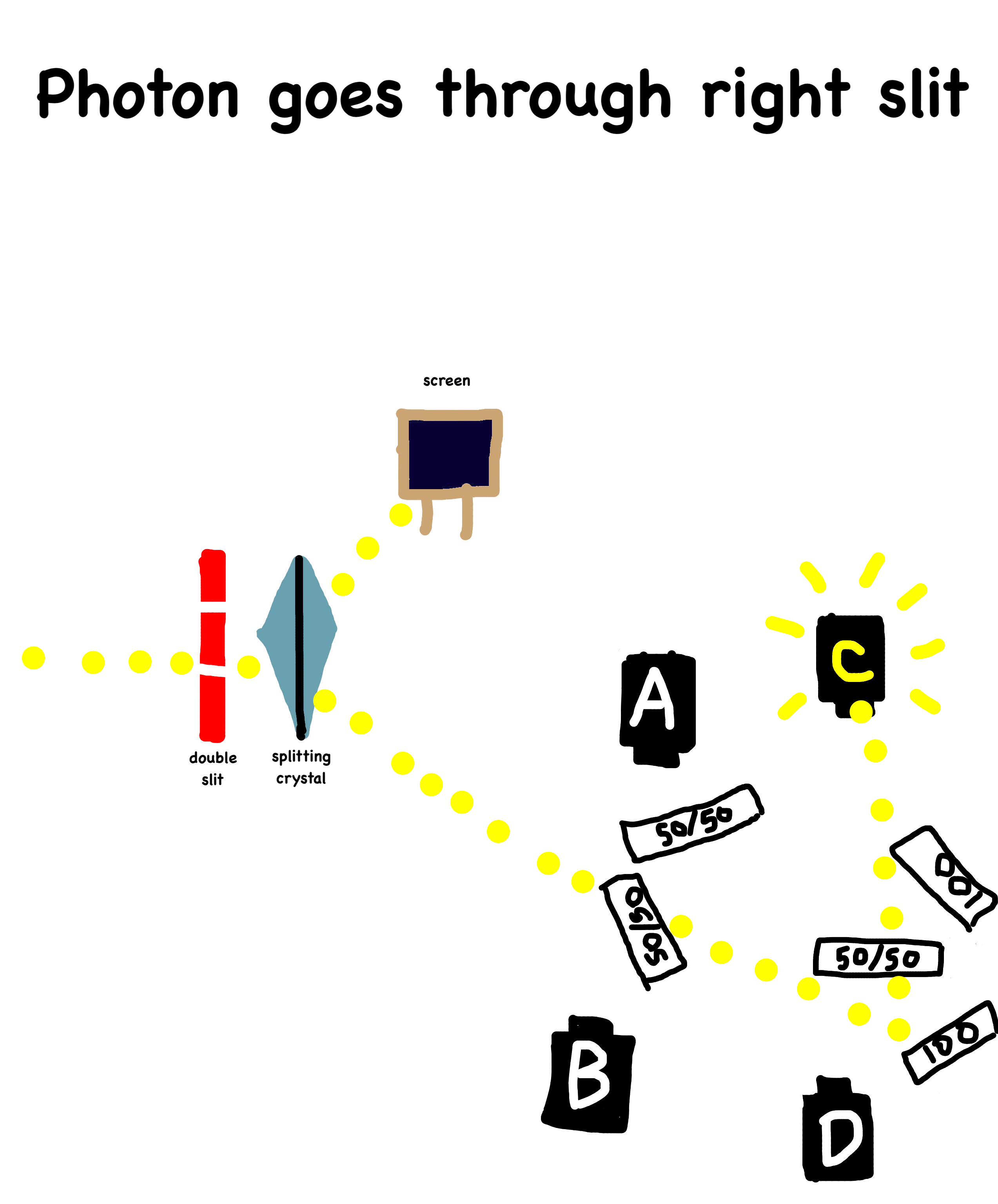 Photon goes through the RIGHT slit, and Detector D lights up: 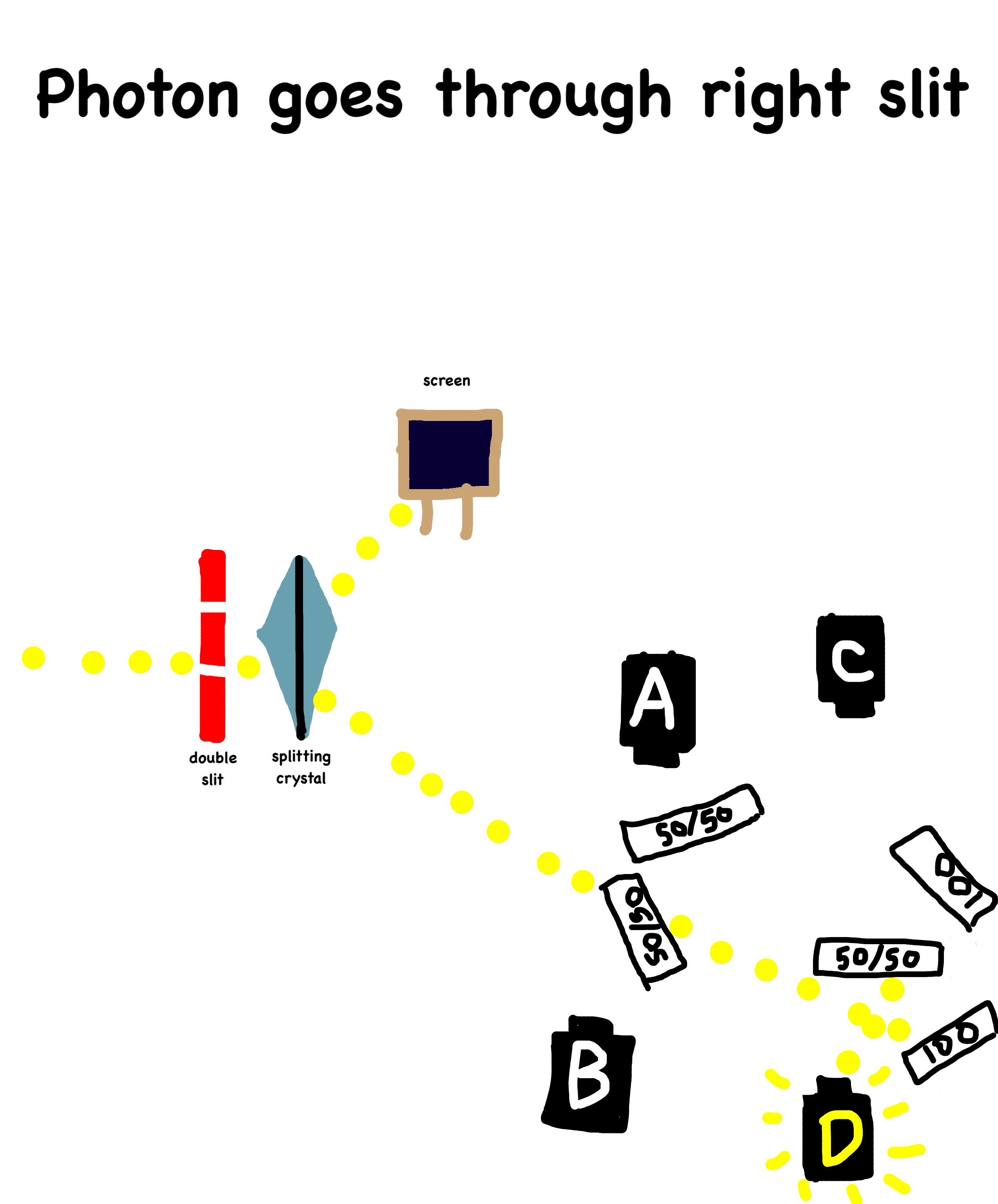 However, remember that we don’t actually have a observer device on the slits, so we don’t know whether the photon passed through the left or right slit.

By adding a bunch of 50/50 reflecting mirrors, we’ve “erased” the information necessary to know which slit the photon went through if C or D lights up.

If you are always the smartest person in the room, you may be questioning my previous 4 scenarios:

TP. Come on. Your lazy ass forgot to show where the photon-twin hits the Screen when Detectors C or D light up. Weak.

If you picked up on that, congratulations. Very impressive.

However, there was a reason I left that information out of the drawing.

When physicists shot thousands (or millions) of photons through this experiment, and then only took the results from the runs when Detector C and Detector D lit up, here is the pattern they saw on the Screen:

The implications of this are huge.

Remember that the photon-twin hits the Screen BEFORE the other photon even starts making it’s way through the 50/50 Mirrors. So how did the photon-twin who hit the Screen know whether to create a Particle Pattern or a Wave Pattern?

Was it able to look into the future and see whether its twin would end up in Detector C or D?

Or was the twin who went into the Detector able to communicate which detector he entered and change the location of the photon who hit the screen? Even though that had already happened in the past?

Or do we just have a misunderstanding of how time works?

But stepping back for one second, how do the photons know that if they enter C or D, the humans can’t figure out whether they went through the left or right slit?

The truth is: we don’t know.

But before this experiment, we were under the impression that it was our observation device that impacted the experimental results. When we talked about the Double Slit Experiment, any sort of scientific observation (whether human or device), would impact the results. That was surprising on it’s own.

But now, we know that it’s not just the interference from our devices that are changing reality or causing the wave function to collapse. The Delayed-Choice Quantum Eraser experiment shows us that the pattern formed on the Screen depends on whether we gain knowledge of the path of the original photon. The experiment seemingly concludes that our conscious awareness of information determines reality.

I know this finale to an article which took ~15 minutes of your life away may seem somewhat disappointing. But most articles about quantum physics will likely end with some kind of “we don’t know” result. There are many different perspectives from respected physicists that completely contradict each other, and it’s nearly impossible to determine which ones should be respected and which are baloney since we can’t actually point at a reason as to why these freaky things are happening.

All we can do is learn as much as possible and be open to the idea that reality doesn’t function like we thought it did. By humbling ourselves, we can remain open to the seemingly impossible.